Last night, I walked two long blocks in Brooklyn with my eyes closed. I wrote a group poem on the sands of Brighton Beach with six strangers. And created a collage out of found objects (read garbage) in a playground as nearby teenagers derisively asked if the group I was in was "shrooming".

Believe it or not, I was on a guided tour.

But not the type of once-over-lightly discussion of culture and history one gets on the typical guided tour. This tour was created by Elastic City (www.elastic-city.com; tours $25 for 1.5 hours), an organization of young NYC-based artists, and it felt more like a happening than anything else.

It was also, I have to say, alternately meditative, embarrassing, and exhilarating. 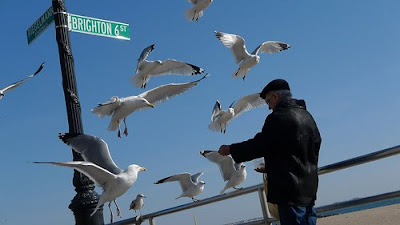 The tour I took--"Brighton Zaum"-- was led by the founder of Elastic City, Todd Shalom, and was an auditory tour of Brighton Beach, Brooklyn. Yes,  sort of like Hillary Clinton's listening tours, but instead of trying to get elected, we were trying to experience the neighborhood in a new way. After doing an exercise in listening skills (that I won't give away; it was fun), we started to silently stroll around this somewhat exotic area of mostly Russian immigrants, with Shalom instructing us on different ways to listen for sounds.

That may sound dull, but actually it was the most zen, relaxing half hour I've had this week. Eye-opening, too. Not to get too groovy about this, but I started to feel like I was experiencing my body's relationship with the spaces around it in a different way. The air seemed to take on unaccustomed weight (beyond the humidity!), and distances between objects seemed more palpable. We weren't "shrooming", as the teenagers guessed, but the walk had a pleasantly psychedelic feel to it.

The second half of the tour was more active, with the "blind walk" (a partner kept me from crashing into a tree; yes, this was the embarrassing part of the tour), and exercises creating group works of art (exhilarating--we wrote a darn good poem in the sand).

Would I recommend it to visitors to New York City? Absolutely. Elastic City has a provocative list of places it explores, including such tourist powerhouses as Ground Zero and the Brooklyn Bridge. And while you're not going to learn the facts and figures about the places you're visiting (you can read about those later), you will engage in your surroundings in a way few outsiders, or even New Yorkers, do. If you can be open to the experience, I think you'll gain a lot of insights not just about the area you're visiting, but also about yourself.

From now on, I'm going to keep an eye out for artist-led tours in other parts of the world. They're a wonderful way not only to see unusual sides of the destination you're visiting, but also to support young artists (so important in these recessionary times).

(Photo by Meg Zimbeck)
Posted by Pauline Frommer at 12:02 PM