I'd usually hold a freebie for Friday, but because this offer is only good so long as supplies last, I thought I'd better get it out there ASAP. 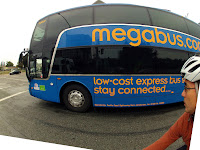 Megabus has announced it will be giving away 20,000 tickets for travel between January 9 and February 28 and almost all of its routes are on sale. All you'll pay is a .50 cent reservation fee.

In addition to these freebies, Megabus is selling $1 tickets for the first week of service (December 12-19) on its new California routes. These go from both San Francisco and Los Angeles to such cities as Sacramento, Oakland, San Jose and Riverside.

I've taken Megabus a number of times between New York and Washington, DC and have always found the experience to be just fine. Except for traffic related delays which can throw off schedules--can't blame 'em for those--Megabus delivers on what it promises, which are clean buses, wifi, friendly service and decent on-board bathrooms.

For full information and to book (quickly!!!) go to www.megabus.com.
Posted by Pauline Frommer at 12:00 AM