Soon It Will Be Easier for Visitors to Use NYC's Subways 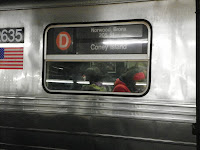 As a born-and-bred New Yorker, I can tell you that some New Yorkers used to take a kind of mischievous delight in the fact that visitors had trouble using our subways. Hey, it cut down on the crowding! Very often, stations would have no maps posted on the platforms; and those maps that did exist were so defaced with graffiti, nobody could see where Times Square was, or how to get to the Statue of Liberty.

Tourists should be very pleased.

As for locals: they'll likely grouse about the new additions. Subway fares just went up after all, and they already know where they need to get off.


Posted by Pauline Frommer at 3:52 PM