As many of us predicted, the cruise industry has taken steps to standardize muster drill (aka emergency or lifeboat drill)  procedures around the world. A joint announcement by the US-based Cruiselines International Association (CLIA), the Europe Cruise Council and the Passenger Shipping Association (of the UK) was released on Friday. 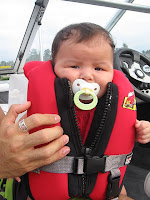 So now, no matter what cruise line you board (and every single one in the world is participating), you will be attending an emergency drill before your ship leaves port. On the Concordia, because passengers were embarking at different times, many had not been notified where to board lifeboats, or where their life jackets were stored, before the ship hit a rock, creating widespread confusion and panic.

Its a non-controversial step in the right direction. Beyond making a very safe vacation activity even safer, let's hope that it puts to rest some consumer worries about cruising. Though I've bashed the cruiselines in the past for charging too much on the 'three S's'---sodas, spa treatments and shore excursions (oh, and internet access, too, now that I'm thinking about it)--the major cruiselines' safety record over the years has been impressive, considering the number of passengers who vacation on them yearly.
Posted by Pauline Frommer at 12:01 AM