For the last two days, I've been on St. Vincent and Young Island in the Caribbean. Here's why: 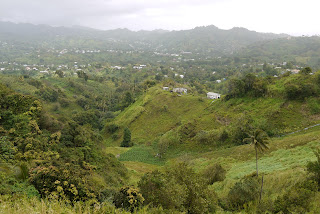 St. Vincent is still a largely agricultural island, very different than the cookie-cutter tourist Caribbean. The Mesopatamian Valley (pictured here and named by the British) serves as the "grocery store" for many of the neighboring islands, its fertile, volcanic soil used to grow most everything: bananas, potatoes, corn, pumpkin, you name it. The volcano shrouded with mist in this photo erupted in the late 1970's. Though locals here don't expect it to erupt again in their lifetimes (and frankly, I don't know the reason why), they note that the richness that ash cloud bestowed on their soil even helped their neighbors. Barbados apparently got a dusting and produced record breaking crops that year. 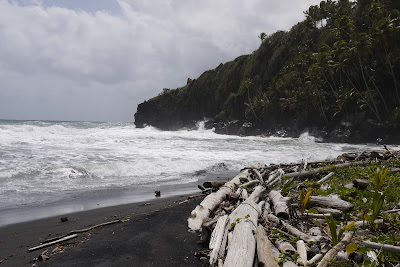 As you can see, some of the beaches are of black, volcanic sand. Soft to the touch, it glitters like fairy dust in the sun. This quiet beach--one of many unpopulated ones on the island--is covered with wood from a recent storm system that brought down a number of trees. St. Vincent is uniquely blessed in the Caribbean, in that its never been hit by the eye of a hurricane (another reason to pick it--safety!) but it has experienced the heavy rain and tidal surges that come from nearby storms. 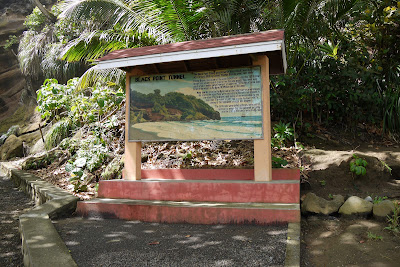 The beach shown above is actually attached to a National Park housing a historic site called Black Point Tunnel--a massive tunnel, blasted by a plantation owner to allow the transport of his sugar crop to a harbor in which boats could land. An impressive engineering feat in its day, the tunnel cost $5000 to create, a number that translates into millions of dollars today. Walking it is quite spooky, as you see the prison-like interior room where the guards had to sleep, making sure no-one stole the sugar while bats swoop overhead. 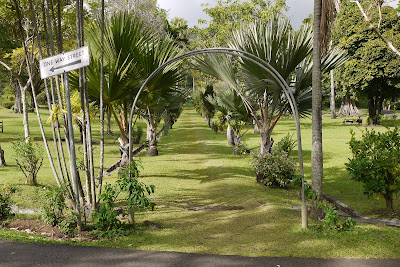 Nearby was St. Vincent's Botanical Gardens. The oldest in the hemisphere, the contain saplings of breadfruit trees brought here centuries ago by the HMS Bounty (yes, that infamous ship). 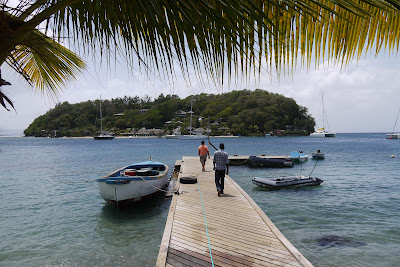 I stayed not on the mainland but on Young Island, a tiny outcropping just a 2-minute ferry ride from the shore. Its where Keira Knightly and Johnny Depp bunked during the making of Pirates of the Caribbean (it was largely filmed on St. Vincent). The hotel has only bungalows and these serve not only as guestrooms but also open air ones make up the terrific on-site restaurant and bar. The hotel also has tennis courts, a pool and board-game room. 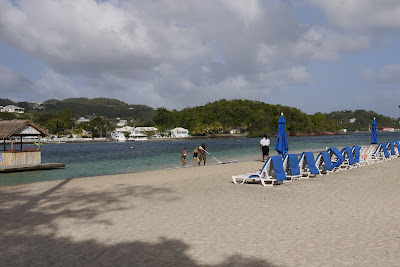 It also has its own little white sand beach as you can see, with a swim-up bar.

I'll report tomorrow from Mustique.
Posted by Pauline Frommer at 9:28 AM