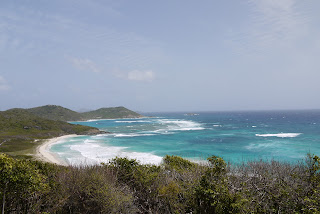 "Mustique"--if you'd tried to come up with a name appropriate for an island crawling with celebrities, it would have been hard to do better, don't you think? Yes, this is that glamland you've read about in Us Weekly and People Magazine. Mick Jagger and Tommy Hilfiger call it home for part of the year (both are villa owners here), Kate and William chose it for their latest romp several weeks ago, and in the past few months the island has hosted the likes of Bill Gates, Morgan Freeman and Denzel Washington.

Why do these bold-faced named choose Mustique? No doubt part of the reason is its intolerance towards paparazzi. They simply aren't allowed on the island. The island's two hotels and villa rental association won't take their calls, not that many would be able to convince their editors to pay the high nightly rates on the island.

Or at least that's one of the reasons Basil Charles (pictured) gave me, when I had the pleasure of interviewing him at the famed Basil's Bar. A man who just about defines the word "charming" he goes on the defensive when his famous customers are disturbed, personally confiscating cameras from anyone who tries to enter his bar with one. (Camera phones are making his life more difficult nowadays).

Charles also filled me in on the other reason the 1% loves this place and that has to do with a well-timed gift back in the 1960's. Colin Tennant (aka the Baron of Glenconner) was then the owner of the island, and he decided to give his old flame Princess Margaret a plot of land as a wedding gift. It was a major marketing coup. The cachet of having a royal in residence soon persuaded other wealthy types to come, and bingo! In no time at all, the creation and expansion of mansions was giving full-time work to a cadre of 500 construction workers. 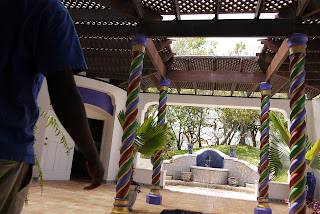 They're homes that would make Kubla Khan jealous. And hoi polloi like you and me, well, if we can't afford to stay in them, at least we can tour them when they're between guests. Almost all of which accept rentals (Want in? Two bedrooms start at "just" $10,000 a week and it goes up from there, though that includes a live-in staff and use of a souped-up golf cart to get around the island). I visited a handsome, infinity-pool bedecked one with a design that gave a nod to Frank Lloyd Wright; and another (pictured) that took its inspiration from Moroccan architecture. I wasn't sure if I was allowed to photograph it, hence the odd angle of the photo. 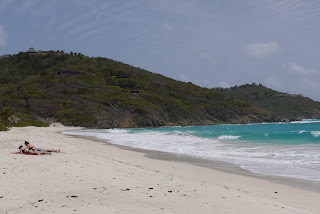 Its not just the 1% who come here, of course. Many arrive in pleasure boats (only those that debark less than 50 passengers are allowed) to spend the day on idyllic Macaroni Beach (pictured above). Why is a beach named for a pasta? It isn't. Apparently, there were two popular local brothers named Mac and Ronnie who liked to hang here. You get the picture.

Beyond the usual beach combing, swimming, and snorkeling, visitors to the island play tennis, ride horses, visit the small museum at the Cotton House hotel (formerly a Cotton Plantation; the museum holds artifacts from both Mustique's Carib and colonial past), get wonderful treatments at the spa (I indulged in a "Complete Luxury Coconut treatment that may well have been the most relaxing spa experience I've ever had) and tan, tan, tan.

More to come tomorrow.
Posted by Pauline Frommer at 12:01 AM