Frontier Airlines Throws Down the Gauntlet 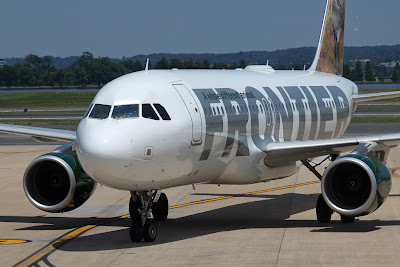 The Associated Press is reporting this morning that Frontier Airlines is making a big play for consumers to book directly at the airline's own website. Those that attempt to book a Frontier flight through Expedia, Travelocity, Orbitz or one of the many other online travel agencies will find themselves confronted with higher fees and awarded half as many miles as those who go direct. Advance seat assignments likewise will only be available to those who book on the Frontier website. In a related move, Frontier announced today that it will reduce by 5000 the number of loyalty miles one needs to get a free flight.

If I were an executive at Priceline, Expedia or one of the others, I'd be feeling a bit nervous right now.

Not because the amount of business a small airline like Frontier brings in can make or break any of those players. But it has found a way to get around the contracts that most of the airlines (Southwest is a notable exception) have with these massive travel agencies to not undercut the prices they post. Frontier won't posting lower prices on its site, but it will be giving consumers a strong incentive to go right to the source. And that helps the airline immensely, as it will decrease the hefty distribution fees Frontier pays; and give the carrier the opportunity to up-sell travelers with offers of car rentals, hotel rooms and the more.

To my mind, it's only a matter of time before the bigger carriers follow Frontier's creative lead. They certainly have incentive.

What does all of this mean for the consumer? A change of habits, perhaps. No longer will it be as easy to see all the flight options on the websites many travelers have come to rely on. Instead, they may have to turn to the aggregator sites (those that simply search travel information, but don't sell it); or head directly to the airline websites.

I'll finish up by pointing out that many airlines have already gotten around the price guarantees they have with the OTA's by emailing and tweeting discount codes right to the public. Those customers who've been able to jump on these flash sales usually get the best prices of all.