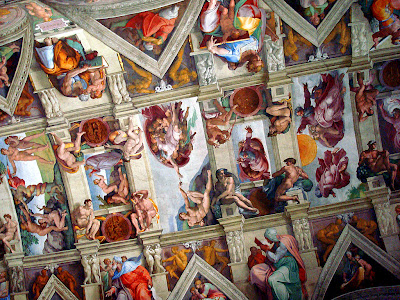 Two small pieces of news that could impact your next vacation if you're going to the Boot:

1) Credit cards and ATM cards can no longer be used in Vatican City: And the reason is truly bizarre.  The Bank of Italy has accused the tiny, Papal nation of not taking strenuous enough precautions against money laundering. Because of this, it has blocked all electronic transactions within the Vatican as of January 1, which means that all of the ATM cards that were once there are being removed; and if you want to buy a postcard of the Sistine Chapel at the gift shop, better have euros ready. I'm assuming from the reports that visitors will also have to pay the entry fee to the Vatican Museums in cash. No word yet on how that will affect advance reservations and tours.

And you gotta wonder:is there fire where there's smoke? (And I'm not talking about the smoke that announces a new Pope). What's the back story here? Has someone accused a Bishop of being in cahoots with organized crime? Methinks a nice action thriller flick could come out of this story.

2) Limitations on driving within Rome imposed: With its swarms of mopeds, byzantine traffic rules, and tiny side streets, Rome has always been a nightmare for motorists. But thanks to new smog reduction measures, attempting to drive inside the "green belt" of Rome could also be a budget buster. The government will be limiting who gets to drive in the city by license plate numbers. Those with odd numbers one day, even numbers the next. Those who ignore the measures and get caught face fines of 155 euros.
Posted by Pauline Frommer at 9:43 AM