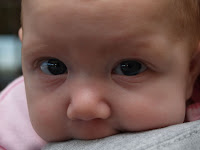 This is a blog as birth announcement.

I am thrilled to announce that a bouncing baby airline has just entered the world. Proud single parent Singapore Airlines has named the tot Scoot. Like all doting Moms, Singapore Airlines hopes her kid will be loved. To ensure that, Scoot's going to be a budget carrier, reportedly lopping 40% off the usual prices for its initial flights to China and Australia. Scoot will start flying when she becomes a toddler, some time in mid-2012.

The move is a startling one from an airline known for its luxury amenities. Sinapore Air has been named, in survey after survey, as one of the best airlines in the world, prized for its high quality service (particularly in First and Business Class). Let's hope this Singapore off-shoot is able to keep its standards high and its prices low.

By the way, Scoot will have some buddies to pal around with: four upstart, budget airlines are being planned for launch in Asia in 2012.

Cigars for everyone!
Posted by Pauline Frommer at 12:17 PM