The Sphinx Will Have To Wait: More Bad News for Egyptian (and Bolivian) Tourism

Every year, the illustrious World Economic Forum issues a report on global tourism, assessing how attractive 140 countries are for developers in the travel sector.

Sounds pretty vanilla, right? But contained within the report is also an influential safety ranking. And this year, Egypt dropped precipitously on that list. 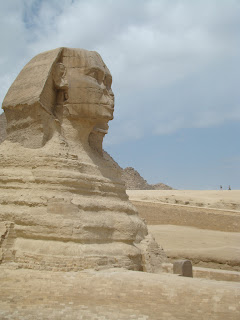 In fact, Egypt, according to this trusted, unbiased source, is now more dangerous to visit than Pakistan, Chad and even Yemen.

The rankings were not just based on the on-going protests in Tahrir Square, though those certainly were considered. Other important factors were the number of road accidents in Egypt, the unreliability of its police force, problems with common crime, and, yes, the potential for terrorist acts.

Tourism officials in Egypt told NBC News that they were "shocked" by the report's findings. NBC reporters Atia Abawi and Charlene Gubash also interviewed tourists in Egypt who stated that they felt very safe in country and had experienced no problems.

In Egypt's defense, this is one report among many (though it's considered one of the most important). There is no current State Department Travel Warning for Egypt....though they do exist for Chad, Pakistan and Yemen.

And hey, you'll have a very affordable vacation seeing the ancient wonders of Egypt: according to the World Economic Forum, Egypt is now the fourth cheapest tourist destination in the world.

Also contained on the list were those countries considered "least friendly" to tourists. Bolivia won that dubious honor, followed by Venezuela, Russia, Kuwait and Latvia. Pakistan also made an appearance on this list (at number 7).

So who shines in the World Economic Forum Rankings

What's a bad report for some, is an A+ for others. Iceland and New Zealand tied for the title of world's friendliest countries. Switzerland, Germany and Austria (in that order) were named the countries with the best touristic infrastructures.
Posted by Pauline Frommer at 11:37 AM