Yin & Yang: More Bad Effects of the Sequester on Travel Plus Unexpected Discounts on River Cruises

So far, it seems like the effects of the sequester vary from place to place, and may not be being fully felt at airports yet, thanks to inclement weather cancelling flights; and furloughs that will start later this week.

Nonetheless, a blogger from Gadling reports that most of his three-hour layover in Houston, on the way from Latin America to another US city took a full three-hours of waiting in line at customs. He called it the longest line he'd ever seen in his life.

DC bound travelers will want to know that tours of the White House have been cancelled until further notice. I'll do my best to post other sequester problems, as they pop up, here in this blog. 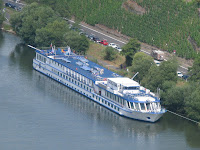 In happier news, two river cruise companies have decided to waive their singles supplements for the near future. AMA Waterways announced Monday that it would allow solos to book double cabins at no additional costs for select cruises along the Danube and Seine. Reservations must be made before March 31.

Rival Grand Circle Cruises announced a similar offer earlier, allowing solo passengers to waive the singles supplement when they book over the phone (the deal is not available online). Solos should call 800-248-3737 and use code TAAT 102 when booking.
Posted by Pauline Frommer at 12:00 AM