Allegiant Loses My Allegiance (And Yours Too, I Hope)

I suppose it was only a matter of time before another airline adopted Spirit Airlines' wet, rude, raspberry of a fee: the charge for carry-on bags. 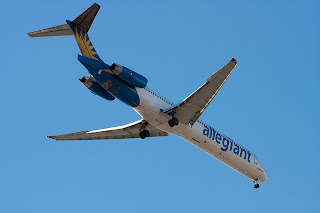 Industry magazine Airline Reporter broke the news yesterday that Allegiant Airlines would now charge $35 for carry-on bags, starting with those who book their tickets this Wednesday. That's the same amount checked bags cost on Allegiant. Small personal items, ones that can fit under the seat, will not be taxed...yet.

The info came from a leaked memo, but was quickly confirmed by official sources. Apparently, there will be a discount for those who pay the baggage fee online first, but the amount of that won't be disclosed until Wednesday.

Never heard of Allegiant? Its not a major player, but it is a profitable one (sigh). Currently Allegiant bases itself in Sin City (where its obviously learned a lot about the sin of Greed), flying also to Fort Lauderdale, Bellingham, Los Angeles, Myrtle Beach, Oakland, Phoenix, Punta Gorda, St. Petersburg and Orlando Sanford.

Far be it from me to tell you all how to spend your money. But you won't see me flying either Spirit or Allegiant anytime soon. I just can't stomach any more nickel-and-diming. Because when one looks at the cost of one's actual journey on these carriers, after all the fees are included, those nickels and dimes balloon into big bucks. And you don't ultimately save, well, a nickel.
Posted by Pauline Frommer at 12:01 AM