I learned an interesting phrase when I was last in Italy: "Dead Man's Shoes". It referred to jobs that one couldn't get until the person in them died. 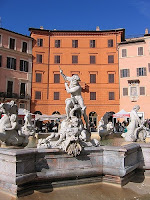 The local woman I was talking with used the phrase to explain why so many government-licensed, Italian tour guides were, well, less than stellar. They'd been doing the job so long, they could do it in their sleep....and often sounded like they were. And because of the way many group tours operated, it was these folks who led the excursions year after year, whether or not they led a scintillating tour.

But these folks are no longer the only option in Italy, or any of the other European capitals for that matter. A number of companies have popped up in the last decade and a half offering guided tours that use one of the greatest resources in these cities: the academics who have come to these places to study their art, architecture and history.  Its these professors, graduate students, art restorers and other experts who supplement their income by leading tours about their greatest passions. Which is a win-win for both the guides and the tourists.

At the forefront of this new style of guiding is an expanding company called Context Travel. It now offers tours to Rome, Florence, Paris, London, Madrid, Naples and a slew of other cities, not only in Europe but in the United States and China. Their guides are superb and carefully chosen, their itineraries truly creative (you might find yourself learning about the propaganda values of ancient Roman architecture, exploring Barcelona's vibrant markets and food culture or taking in the thriving gallery scene in Berlin). These types of experience tend to cost between 35 and 105 euros per person, less if you can get a group together (maximum of six people).

Thanks to a grant, this spring and fall Context is also offering a host of 5 euro tours to some of the hidden gems in Europe's great capitals. Called "Tours in the Public Interest", these special programs encompass walks, workshops and lectures. They are led by Context's passionate experts and will take participants to places that are usually off-limits to the public in Rome, such as the underground archeological area of St. Maria in Via Lata and the cistern at Trajans Baths. An April 28th walk in Berlin will explore the Nazi history of that city. Similarly fascinating walks are planned for London, New York, Philadelphia and Boston in the coming months.

To learn more, click on the link above, and go to the section of the site marked "Tours in the Public Interest".
Posted by Pauline Frommer at 5:39 PM