Another Carnival Cruise Fiasco Plus My Sequester Watch Continues 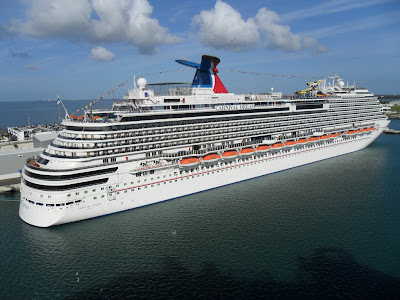 Oops! Carnival did it again. And again.

Yesterday came word that the Carnival Dream had experienced power problems which were going to result in the ship aborting its itinerary and flying passengers home from the Caribbean. Thankfully, the Dream was in port when some systems failure occurred. (It was first reported as a power outage, but Carnival is now disputing that and saying that the issue was with back-up generators).

The cruise line's refusal to let passengers off the boat on Wednesday, after the incident occurred, means that those on-board briefly experienced conditions t similar to those the Carnival Triumph passengers endured (mostly overflowing toilets and lack of elevator service, according to press reports ). On Thursday afternoon, passengers were evacuated off the ship to begin the process of flying back home.

The company has said the passengers will receive cash compensation equal to three days of the voyage, plus 50% off future cruises. My guess: that settlement will become more generous as the hue and cry reaches the press.

Today, reports are out that another Carnival ship, the Carnival Legend, is experiencing propulsion problems. Instead of being able to stop in the Cayman Islands, the ship will be staying out at sea so that it can return to Tampa in time. Though I'm sure passengers on board must be disappointed to miss their cruise stop, at least their comfort isn't being compromised (according to news reports).

Wow! Can it get any worse for Carnival, PR-wise?And when one cruise line suffers a blow to its public image, the entire industry suffers.

As I said a month ago: watch cruise pricing. It's inconceivable (to me, at least) that we won't see a dip in the cost of a cruise, thanks to these three events.

Thankfully, the TSA has been able to come up with a better strategy than furloughing staff to deal with budget cuts due to the sequester. But it is still advising passengers to get to airports early. That advice has been backed up by Stacy Bodtmann, a spokesperson for the TSA's union workers. According to Bodtmann, the agency had been making use of overtime to keep lines short. That option was now off the table. And due to a hiring freeze, there will be 1000 open positions by summer (2600 by the end of September), a situation that will also slow down the ability of these agents to process passengers quickly.