Cruising's PR Bruising: What Does It Mean for Would-Be Passengers?

After three Carnival Cruise mishaps in a row, of varying degrees of seriousness, the world outside of the hothouse travel industry is taking notice and taking action:

Shares of Carnival dropped 2% yesterday on the news that Standard and Poor had downgraded the cruise giant from "stable" to "negative". This follows another drop on Friday, precipitated by Carnival's announcement that it would be spending tens of millions of dollars to check all its ships, rewire some and ensure that all had the necessary redundancies to reduce the chance of them losing power while at sea. 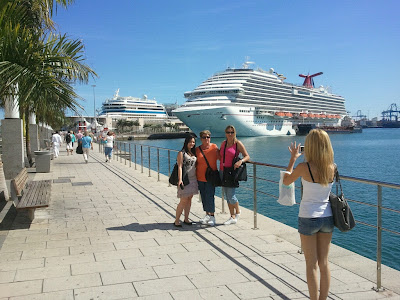 And as you might have guessed, the problems seem to be affecting cruise pricing across a number of brands. I just surfed over to VacationsToGo.com website where I found weeklong cruises for as little as $275 for a weeklong Med cruise (aboard Pullmantour, a round-trip from Genoa). In terms of Carnival Cruises, I've found ones in the $250-$300 range in the Bahamas and Caribbean for four- and five-night sailings.

Will prices go over lower? That's my guess, based on the way these things have gone in the past.

We also got a call from a listener to this weekend's Travel Show asking if the price on her already-booked Carnival Cruise might have dropped. Our response was "probably". We advised her to contact her travel agent, so that she could either get a lower price on the sailing; or at least the types of perks the cruiselines tend to rain on passengers who make some noise (I'm talking free upgrades, on-board ship credits and more).

So should passengers book Carnival after all of its problems. I'd say yes, and here's why. Not only will prices be lower than usual, if you're able to book soon (there's been a reported double-digit slump in bookings, but if they pick up, prices will pick up, too); but staff vigilance will be at fever pitch. Carnival and its employees know that NOTHING can go wrong in the coming months. So traveling with this particular brand will likely be an even better experience than usual right now.
Posted by Pauline Frommer at 12:00 AM