Disney's Discounting in summer?!? Well, Look Who's Moving in Next Door

Methinks a bespectacled little boy, with a lightening strike scar on his forehead, has a certain Mouse running scared. How else to explain Disney's high season discounting of its All Star resorts this summer? With the Wizarding World of Harry Potter opening mid-June at Universal's Islands of Adventure, DisneyWorld had to squeak a bit louder to get heard.

And squeak louder it did. Usually when Disney discounts its All Star Resorts, the price falls to $79 (from $99 usually, peaking at $109 during crowded seasons). This time the midweek price will be just $58, a significant deviation from the norm. (Discounts of 20% to 40% are available on Disney's more upscale properties.) 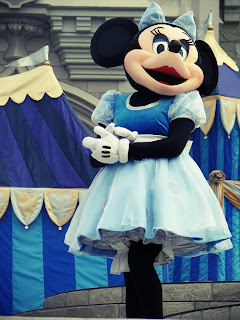 Frankly, I'm not a fan of the All Stars. Cinder-block motels with little charm and fewer amenities, they're actually farther from the Disney World attractions than the cheaper motels on International Drive. (The All Stars were not built originally by Disney, simply lightly refurbished when the company finally decided to go after the budget market). Still, you do get certain perks by staying on Disney property such as extended "Magic Hours" at the various Disney theme parks and free transportation within the parks and in from the airport. It's that last freebie that keeps most visitors who stay at Disney from going anywhere else in town during their vacation; they don't have the wheels (or the will) to get to SeaWorld, Universal Studios or one of the city's myriad of other attractions. So what Disney giveth it taketh back, in additional moneys spent on food, souvenirs (again, you'll find these cheaper outside the parks), sunscreen, you name it.

But back to the deal. Best prices kick in August 15 for midweek stays only. If you book an earlier date you could pay $102 per night or more for an All-Star Resort, with a 20% savings on the Mouse's plusher properties (discounts for these increase to 40% in mid-August). To see full details, simply click here or call 407/939-5696

But be careful if you use the phone to book. Disney agents are expert at up-selling! Before you buy a package from them, with entry to the parks, meals and the like, think through carefully what you want your time in Orlando to be like. Will you want to go off property for a day to visit Harry Potter? What time will your flight arrive (if it arrives after noon be sure you don't get stuck paying for a full day at the parks that you won't be able to use). Do you have tape worm? I ask this last question because the Disney Dining program only works if you eat waaay too much, and spend far too much time at the resort's sit-down restaurants (time that could be better spent on the rides).

It will be fascinating to see just how this rivalry between Wizard and Mouse plays out in the future.
Posted by Pauline Frommer at 2:00 AM