An Interview with a Veteran "Couchsurfer"

Late last September, I got a call from my dear friend Erin Hill. She had just gotten a job in the orchestra of the Broadway touring production of "South Pacific" (she's a harpist) and was hoping to save money on the road by staying with friends or friends of friends. Problem was, she couldn't find anyone who knew people in Greenville, South Carolina, Raleigh, North Carolina or the other cities that the tour was playing. I suggested she try finding lodgings through the website Couchsurfing.com, a site that connects travelers with friendly people who have extra bedrooms and open them up to visitors at no cost. She's been traveling for free ever since. 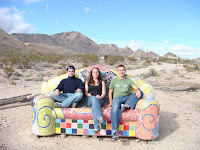 Today, she's a much greater expert on the activity of Couchsurfing than I, so I called her in Los Angeles (her current stop on the tour) to interview her about the ups and downs of her experience. Here's our conversation:
Pauline: So how long have you now been on the road? And have you exclusively "couch surfed" while traveling?
Erin: Oh, wow, I should be looking at a computer so I can tell you. I started in the end of October, and took 11 weeks off in the middle. So, all in all, I've been sleeping with strangers (she laughs) for a good four months now. And I haven't had to pay for a hotel room once.
Pauline: How much money do you think you've saved altogether?
Erin: Well, let me see. I guess I would have paid a minimum of $70 a night for hotel rooms. Let me look at the calculator on my phone.  I'm guessing I've saved at least $8000, probably more.
Pauline: Tell me how you got started with Couchsurfing.
Erin: I googled "Couchsurfing" and when you google it, the second link that comes up, after couchsurfing.com, is "Couchsurfing horror stories". So I went to the complaints before I looked at the couch surfing site. They amounted to things like people finding hair in a sink or getting a boring host. And I thought, well, if these are the horror stories, I think I can handle this fine.

So I went to Couchsurfing.com and created a profile. At the beginning I didn’t realize how important it is to upload a picture and make sure I gave a lot of information about myself . I hadn’t even uploaded a picture when I requested my first stay. But luckily, in my email, I included a link to my website so the guy could see I was a normal person. My host told me later that he wouldn't have responded to me if he hadn't seen the website and felt like it was enough to verify that I was a decent person. (Pauline's note: Erin's website contains samples of her music, photos of her and her resume).

Pauline: So putting up a profile is important to the process?

Erin:: Really, really important. You should upload several pictures, and give details about who you are so that people will want to host you.

Also, part of the process involves getting your identity verified by Couchsurfing.org. You send in your profile, then Couchsurfing sends a postcard to your house with a code on it. You have to enter the code online. That way people know you’re a real person, you really live somewhere and it’s all kosher. When I’m looking at possible places to stay, I only stay with people who have verified themselves in this way.
I also donated $25 to Couchsurfing and that turns up in my profile. If someone’s trying to abuse the system, it’s unlikely they’d donate, so that's a good thing to look for, too, when you're considering hosting people or staying with them.

Pauline: Okay, so you get your profile going. Then how did you decide to stay with? And how many tries did it take before you got matches?

Erin: Well, the first thing you do is get to the right area of the site geographically and start reading people’s profiles. Then you decide whether the person you're reading about sounds cool, like someone you'd get along with. If they do, you send a request. Then they respond either yes or no.

As for how many tries it takes, that varies. My first time, I emailed only one person and he said yes. When I went to Lincoln, Nebraska I had six places to choose among, everyone said they'd host me! I chose the guy that I ended up staying with for two reason. First off, he said his aunt was a harpist for the Des Moines symphony and secondly, he said that he was a big comic book collector and I love comics. That stay was fantastic! I met his whole family--his mother took us out to dinner, I went to see his band play and I met his aunt. Actually, when the tour went to Des Moines, his aunt hooked me up with another harpist to stay with in Des Moines. We're still really great friends and he came to visit me in New York City when I was off the road.

Pauline: Sounds like a great time. Did you ever have any bad experiences?

Erin: You know, I really didn't. The worst that happened was that one of my hosts was a bit boring. I won't be keeping in touch with him. But that was one out of, I guess, 14 hosts I've been with. The rest were wonderful.

Really, this experience has restored a little bit of my faith in the world. Everyone has been so great. People have lent me their cars, and picked me up at the theater with my luggage. The folks doing this do it for all the right reasons: to meet other people and do a bit of good in the world.

And I love not having to go to a sterile hotel room at the end of the day. You’re in a real home, you’re with people who know the area. You go to places you never would have found if you were staying in a hotel. The whole spirit is wonderful.

I always wanted to be around in the 1960's and Couchsurfing feels to me what I imagine the 60's would have been like, peace and love and all that.

Pauline: What would you say are the rules of etiquette for Couchsurfing?


Erin:Well, if you look at the references people have posted on my profile, one thing that keeps coming up is that I’m laid back and easy-going. To be a good guest, you just go with the flow. Once I slept on a couch that was too short for me for a few days but that was okay, I made it work. And I loved meeting that host. You never know what you're going to get, it really runs the gamut. In one place I had my own room with an attached bathroom, and a host who left early in the morning for work, so I had the run of the place.

Key things: you don’t want to complain and you wash the dishes immediately after you're finished using them.

Pauline:Is there a length of time most guests stay?

Erin: Based on my touring schedule, I usually asked to stay a week. But you can ask whatever you want and they can say yes or no. I have found that people often say "you can stay with us for these three nights", but once you get there they say you can say longer. A lot of people say just three nights so they can make sure they like you. Knock wood, everyone's liked me so far!

Pauline: Do you have to host people now when they come to your hometown? Is that part of the deal?

Erin: No, you don't have to reciprocate. But once you start couchsurfing, I don’t see how you could not want to. That’s part of the beauty of it. People have been so nice, welcoming me into their homes. And I’ve loved reciprocating. Some of the people I stayed with have come to visit. I've also welcomed strangers into my home. I love making friends and I now feel like I have friends all across the country. Really, it's just so cool: I have so many places I can go now and be welcomed by friends.

(Photo of three possible couchsurfers by Satem Kemet)
Posted by Pauline Frommer at 2:00 AM