Two years ago, my husband, our two daughters and I set off on what would ultimately be one of the priciest vacations of our lives. We headed to the UK, and because the British pound at that time was pounding the dollar, even the simplest meals cost at least $80 for the four of us. Car rental fees were through the roof (we spent part of the time motoring around Scotland) as were admissions fees. 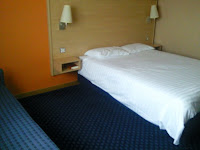 Where we didn't get taken was on our nightly sleeps, and I can thank Travelodge for that. We stumbled upon a sale, one that's being repeated right now, which allowed vacationers to book rooms for just 19 pounds a night. Sounds like a come-on, right? Not so! Travelodge was (and is) offering hundreds of rooms at these rates. We were able to book stays in several Scottish cities for less than 20 pounds.

The hidden extra value of Travelodge is that these rates aren't just for singles and couples, they also apply to families. In each property, many of the rooms are equipped with couches that handily transform into trundle beds, allowing 4 people to share a room comfortably. Travelodge does not charge extra for these rooms, bucking the British trend of sharply hiking prices for quad rooms.

And rooms are pretty comfortable. The furnishings are Ikea-esque, well-maintained if simple (see the photo). Bathrooms are private and yes, small, but well-designed so they don't feel too cramped. There are never amenities like  swimming pools or room-service at the hotels, and often the location of the motel is off the highway rather than in the heart of town, but these seem fair trade-offs for a stay this cheap.

For full information, click here. Do so sooner rather than later: the sale lasts only as long as the inventory of discounted rooms does.

(Photo by Karen Bryan)
Posted by Pauline Frommer at 4:00 AM