Though prices in general are floating upwards, every once in a while a route doesn't sell and the airlines are forced to discount. Here are some of the best sales I've seen recently: 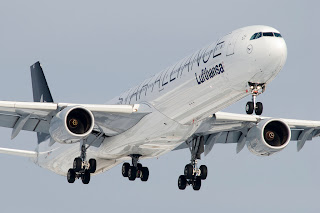 Turkish Airlines from Washington, DC, New York or Chicago to a number of European and Middle Eastern Gateways: The first half of February seems to be the best time to snag these offers, which include Washington,DC-Sarajevo ($492 round-trip), Washington, DC to Sharm-El-Sheik ($503 round-trip), and a slew of $699 round-trips from DC to such far flung destinations as Stockholm, Amsterdam, Athens, Frankfurt, Geneva, Lisbon, London, Madrid, Moscow and Paris. From Chicago, deals include Istanbul round-trip for $525, Isfahan round-trip for $599 and Izmir for $619. From NYC, the best offer is a $499 round-trip to Istanbul, though $599 to Kermansah is also quite a value.

Lufthansa puts May in Europe on Sale: Best prices are usually from the NYC area to Dusseldorf for $609 and to Tirana for $879. From Chicago, Lufthansa has a sale to Istanbul $789 and Sofia for $839. Istanbul is also the best value from Dallas/Fort Worth and Miami ($669 round-trip). Tickets must be purchased by May 15 for departures May 17-30 and returns by June 30.

American Airlines to Doha, Qatar: I spotted this one on AirfareWatchdog. The price is just $680 for round-trip travel through March 15.

Air Berlin Sale: And this one I learned about at last weekend's LA Travel and Adventure Show (a perk of going to travel shows). For travel from now through April 30 (Wed, Fri and Sun flights) the airfare from LA to Dusseldorf will be as little as $729 round-trip. For more information, go to www.airbelin.com

Posted by Pauline Frommer at 9:33 AM