As I promised, here's my dish on what had to be one of the funniest meals of my life. Now, I enjoy laughter, so in a sense this was quite a good thing. But every once in a while, the pretentiousness of the experience reached laughable levels.

It was at one of Chicago's most celebrated restaurants, a tasting-menu-only, Michelin starred joint with the plainest decor I've ever seen in a restaurant (I suppose all that unadorned wood was meant to keep the focus on the food). The music was the kind you hear before and during a very bad massage. And the waitstaff scuttled around like Secret Service agents, each with earpieces and a mic on their sleeve so that they could share your every whim with the kitchen and time the meal to the second. (That being said, they were a friendly bunch, though the sommelier performed her duties almost as if she were in some sort of odd ballet, so stylized was her presentation of the food). 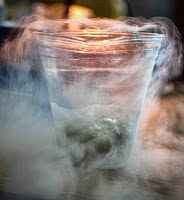 The first course was a long rectangular plate with about 12, teeny, tiny dots of sauce on it (none larger than a dime) to represent everything you'd eat in the meal to come. That was a fun touch, I thought. Next up were a slew of still lifes; some were delicious, like the "duck a lorange" which consisted of a glass box with an orange in it, and a plate of duck on top; the diner then poured sauce from inside the hollowed out orange over the duck. Others were just, well, odd, like a very fishy fish dish; and a "breakfast radish" concoction which consisted of every single radish known to mankind, surrounded by butter every which way, from artfully sculpted with liquid nitrogen, to aerated butter, to shaved butter. And what did all this butter taste like? Well, like butter. At one point, a large pile of wood covered with ribbons of cinnamon were placed on my table, followed by a blowtorch weilding waitress who ran the flame over the cinamon simply so I could smell it as I dined on bison. Other chi chi ingredients included tundra grass from Alaska, candied praying hand fruit, foie gras and on and on.

Ah well, live and learn. I have had masterful molecular gastronomy elsewhere (most notably in Aix En Provence), but not here.

Any guesses which restaurant it was (not that I'm sure I'll say)?
Posted by Pauline Frommer at 12:00 AM