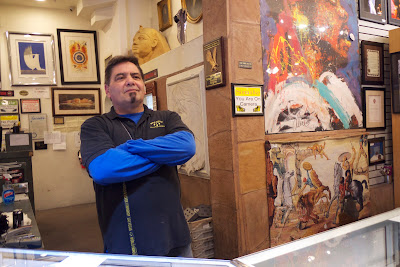 “Its like a museum,” boasts Rocco, the heavily tattooed and pierced, one-named pawn broker as he gestures around the World Famous Gold & Silver Pawn Shop (713 S. Las Vegas Blvd) in Las Vegas. “But it’s better than any museum, because here you can take all the exhibits home with you!”
All around me, the heads of onlookers nod approvingly at his words. To them, this is no ordinary pawn shop, but the realm of Chumlee, the charismatic broker who gilds junk with fairy dust many nights a week on the History Channel’s hit show “Pawn Stars”.  And though Chumlee himself is nowhere to be seen, nobody around me seems to mind, happy to gawk at the assorted gold watches, collector’s edition comic books, memorial poker chips, and other ephemera that crowd the shelves of the very crowded shop.
“We used to get about 50 people a day wandering through,” says Rocco. “Now we get about 2000! Sure, not all of them buy, or they just pick up a ‘Chumlee for President’ t-shirt. But if one in two hundred goes for a watch or one of our fine works of art, we’re doing better than we used to.” 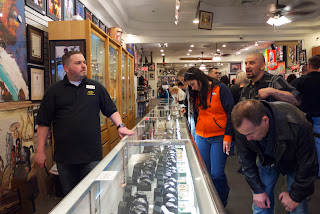 Looking around, I don’t see anything that I think qualifies as “art” but what do I know? Nobody blinks an eye when Rocco points to an etching on the wall and declares it an “original Rembrandt”, or brags that they have “five original Salvador Dali works in shop right now.”  It seems boorish to quibble, when just being here is such a buzzy experience…and getting inside took a good 40-minute wait in line.
World Famous Gold & Silver Pawn Shop is just one of the new breed of reality-spawned tourist attractions that’s delighting tourists across North America.
Near to my office in Hoboken there’s now a line in front of what I always thought of as the bakery with the driest, most tasteless cookies in New Jersey, Carlo’s Bake Shop (95 Washington St.) But because TLC’s “Cake Boss” features the loud-mouthed owner of the shop, those lousy sweets are flying off the shelves. (Tip: to avoid the line, borrow a local’s Hoboken driver’s license; locals get cutsies here.)
Mood (225 West 37th Street), the New York City fabric store featured on Project Runway, has put Gotham’s blighted, ugly Garment District on the map. Its aisles are filled daily with people who’ve never lifted a needle.
And in Los Angeles, a staffer at High Voltage Tattoo (North La Brea Avenue) told the Los Angeles Times that 90% of its customers are fans of their show LA Ink. Many more just come in to watch clients get their tats. Dash (4774 Park Granada, Calabasas) the boutique run by the Kardashian sisters and mom, now also has its place on Southern California’s tourist trail. 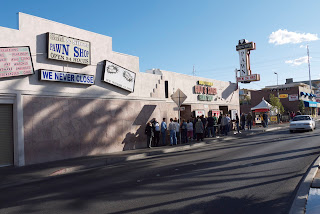 Apparently, even venturing into a swamp isn’t too extreme if it might mean catching a glimpse of a reality star. The website Louisiana Destinations (http://www.louisiana-destinations.com/swamp-people.htm) gives advice on where to spy the characters from the History Channel’s popular series “Swamp People”, a show about gator hunters.
Do people get what they want out of the experience? “I came to Las Vegas for a convention, so I didn’t make a special trip to visit the pawn store,” Kim from Milwaukee, told me when I buttonholed her at World Famous Gold and Silver. “But I figured, while I was in town, why not come down and see what its like? I was hoping to see some of the characters, but its just interesting to see what this place looks like in person. And what the heck, it was free!”
For now.
Posted by Pauline Frommer at 12:01 AM