Urban China can be a shocking experience.

In Beijing, one not only smells but tastes the air--the pollution is that thick.

Shanghai looks like a set from a Ridley Scott sci fi thriller, jammed, as it is, with so many dozens of massive and modernistic glass towers one expects to see space ships zooming between them.

Even smaller cities like Xian or Chongquing offer such an overload of  bustle, crowds, noises and smells that they make the visitor's pulse race.

The cities of China are an unmissable, electric and edifying experience for the traveler. It is exciting and exhausting. 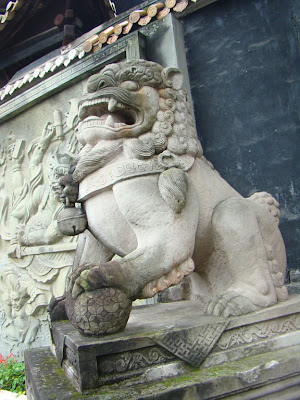 But what about the vacationer who wants to enjoy some relaxation while exploring the "Middle Kingdom"? He should head to the middle of the country--for a Yangtze river cruise. A gentle, sometimes almost soporific experience, it takes visitors through the rural China we've all seen depicted on the classic Chinese landscape paintings. As the boat glides by at a gentle 10-miles-per-hour or so, the tourist gazes at the famed and oddly humpy mountains of the region. Often interlaced with little waterfalls, they're covered with elegantly drooping trees, just as they should be. When the boat stops for shore excursions, it's to see handsome and historic temples, massive statuary from the time Emperors ruled this land and pretty pagodas. Modern China is represented by the massive locks of the 3 Gorges Dam, a project that is both impressive and frightening in its scope (and potential problems). Many itineraries spend an entire day simply navigating these humongous locks.

And the life on board ship?  It's just as happily drowsy, consisting of lectures on Chinese medicine and language, talent shows, and teas.

The experience is not for everyone, but as I said, it does make for a relaxing break from the bustle of the usual China tour. And this summer, these floats are going to be unusually affordable, thanks to a promotion being offerred by Victoria Cruises.

The company that pioneered Chinese River Cruising has recently announced a two-for-the-price-of-one deal on all sailings between June 20 and August 31. The promotion is for superior cabins only (which cost $880 per person usually), and will apply to new bookings exclusively. To learn more click on the link above.

Everyone should visit China sometime in their life. Perhaps this discount will encourage some to do it sooner rather than later.

Posted by Pauline Frommer at 4:03 PM