Its the Scots, not the Irish who have the reputation for thrift. But Ireland's financial crisis, and the travel deals it has spawned, may change that. Ireland now is THE destination for frugal travelers, as I've stated in this blog ad nauseum (especially when discussing recent deals from Brian Moore International Tours and Sceptre Tours). 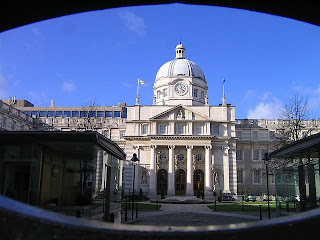 Now, Gate 1 Travel has entered the discounting fray, with a terrific sale that drops the cost of a four night holiday in Dublin to just $599.

Why is that such a good deal? Because the price, is lower than the cost of airfare alone, yet includes flights (from the NYC area at the lowest rates; other cities available for a reasonable additional cost), fuel surcharges and airline taxes, a comfy and centrally located Dublin hotel and breakfast daily. Not that you'll likely need them, but Gate 1 also has some well-priced day trips to Northern Ireland and County Wicklow for folks who take this offer. (I should think with just four days, most folks will simply tour Dublin, which has more than enough to see and do in that amount of time, including the lovely government buildings as I've pictured).

The sale price holds for several departures in January and February; for other months, expect an uptick of between $80 and $200. To get this rate, you must book no later than July 23, using the code DLDVV50. Here's a link to the booking page.
Posted by Pauline Frommer at 11:20 AM