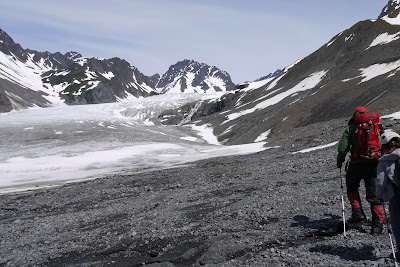 I can't leave the topic of Seward, or Alaska, without talking about glacier trekking. (And then, I'll get off the topic of Alaska--pinkie swear! This blog has been shanghaid by one destination for far too long!).

Frank acknowledgement: I'd never been close to a glacier before I headed to Alaska. Yes, I'm a world traveler, but somehow I'd never come in shouting distance before (or wait, can that cause an avalanche. No, wrong type of white, cold stuff). This, despite visits to Argentina, Switzerland, Norway and other countries that proudly harbor these moving, massive chunks of ice. (I'm usually a city gal, what can I say?).

I'd assumed that they'd be somewhat like an overgrown ice skating rink; glassy, smooth, a bit dull. Kind of like what I imagine Kim Kardashian's' personality to be like (I'm not a viewer of her show, have only seen her, well, everywhere).

But just as the Grand Canyon has far more interest than a big whole in the ground, so Godwin Glacier (the one I trekked) turned out to be a full blown, icy miracle. At certain points it looked like a New York City sidewalk, several days after a snowstorm, it was that gritty and untidy, from the silt its churned up. But step a few feet further, and you'll find yourself gazing into a crevasse that opens up like a bright blue portal into heaven (it would have blown Dante's mind, something that angelically blue leading down in the icy depths). 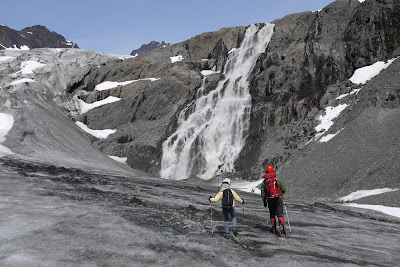 And because of Alaska's unusually heavy snows this past winter, my glacier (yes, I've claimed ownership) had a powerful, 500-foot waterfall gushing from its back. It was taller than most waterfalls in the "Lower 48" yet had no name. It was simply a "pop up" gusher, a fluke, a thing of intense beauty that will likely only be there for a short time. Suffice it to say, I feel privileged to have been sprayed by the thing.

And to have seen ice worms. And the undulations of the ice. And the castle of the ice princess. (OK, that last one was just to see if you were still paying attention). 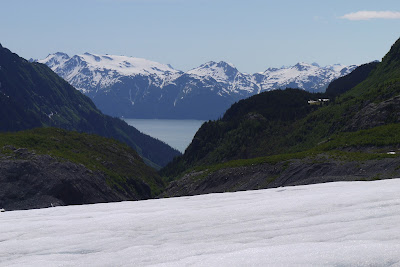 I had this extraordinary adventure with the help of Exit Glacier Guides, a company begun by two young fellows who fell in love with ice trekking and decided to share the experience with others. They're still the only licensed guides in the area, but competition wouldn't likely cause them to raise their game, as they do a darn good job. Safety is first, their staff is personable and enthusiastic, and the supply, with the cost of the trek, the best darn GORP you'll likely ever try.