New "Fees"! Not From The Airlines, For Them

News is out this week that two major airlines may be anteing up more cash than they'd like soon. 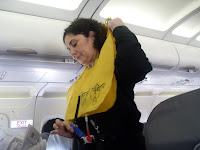 Spirit Airlines, famed for the abundance of its customer fees, is being hit with a lawsuit alleging they've disguised one of their extra fees as a governmental tax. The company has been charging something called a "passenger usage fee"--it can range from $8.99 to $16.99--without much explanation. Turns out, that fee is not a governmental one, but something Spirit uses to cover the extra costs associated with throwing airfare sales. A Miami firm has filed a class action lawsuit, alleging this fee does not offer any additional services, and therefore should be part of the airfare. By simply charging the fee, without explanation, Spirit makes it look like a government mandated cost, according to these consumer advocates, and that type of obfuscation is now against the law. You can read the complete piece here.

The other cash grab, since it involves safety issues, is a more disturbing one. According to Reuters, the Federal Aviation Association could be levying fines of over $150 million against American Airlines, for maintenance and oversight problems. Does this move point to real dangers over at American? Or is the feds' attempt to get the fines it deserves from an airline that's in bankruptcy, and is beholden to a lot of creditors? I'd say that's unclear at this juncture. To read that complete piece, click here.
Posted by Pauline Frommer at 10:11 AM