The First Big Hurricane of the Season Is Upon Us! Some Travel Advice 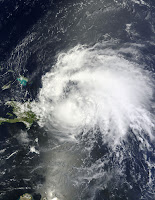 On last weekend's radio show, my father and I got a call from a listener who was nervous about tangoing with Irene. She was set to head to Florida later in the week, and was concerned that she was placing herself in the path of a hurricane.

Reader: we muffed the question. Unlike other call in radio shows on which the hosts know the questions in advance (ahem, Car Talk on NPR!), we have no idea what's going to be thrown at us until minutes before we have to talk (a computer screen displays the callers name, hometown and one sentence on their question).

My father and I told the caller that only she could make the decision about whether or not to go, and that, since Irene's path was still uncertain at the time of the call, we'd probably go ahead with the vacation.

Here's what I wish we'd said:

Last year, was a particularly bad season for hurricanes, the third worst on record. Meteorologists are predicting that 2011 will be just as fierce. Forewarned is forearmed!
Posted by Pauline Frommer at 12:49 PM