Muggles We May Be, But We're Increasingly Living in Harry Potter's World

The original books were the fastest selling tomes in publishing history. The last movie in the series broke box office records. Theme park experts are tut-tutting about how much ground Disney World has lost to Universal Studios ever since the Wizarding World of Harry Potter opened. 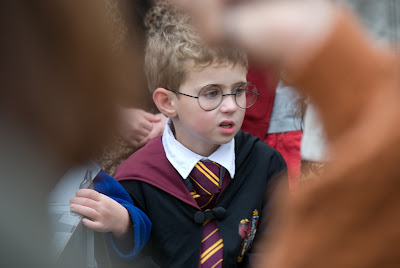 And if that all weren't enough, there will now be two more ways for tourists to enter the world of the boy wizard (and buy souvenir round glasses, wands, striped scarves and many other family-heirlooms to-be).

Through September 5 only, Harry Potter: The Exhibition will continue to delight New York visitors in Times Square. Full disclosure: I haven't seen it, but both of my daughters (ages 8 and 12) were wowed by the show (one went twice!). Apparently, its quite interactive, filled with impressive memorabilia from the movies and yes, has a neat gift shop. (My Mother's Day gift this year was a horcrux locket. Not quite sure what the symbolism of that is in relation to the holiday).

After New York, the Exhibition will be moving on to Sydney, Australia where it will open on November 19 (and play through March 18).

Across the pond, its just been announced that the UK studios where much of the movies were filmed are being transformed into a permanent museum. Beginning in spring of 2012, visitors will be invited to take a "backstage tour" of Warner Brothers Studios in Leavesden which will include visits to the sets that served as Dumbledore's Office, the Gryffindor Common Room, and Hagrid's Hut. The animatronic characters featured in the film--basilisk faces, gryphons, dragons, etc--will also be featured. Actor Rupert Grint, Harry's best friend in the films, has been giving interviews promising that visitors will be 'amazed' by the level of detail on the sets.

Not surprisingly, the folks at Warner Brothers are expecting a mad rush for tickets and so will be putting them on sale a good half year before the opening. They'll be available online starting October 13 at www.wbstudiotour.co.uk (28 GPB each).


Posted by Pauline Frommer at 1:05 PM