The latest fad in cruising has nothing to do with midnight buffets and hairy chest contests. But more and more lines, particularly the high end ones, have been announcing recently that they want to provide an "all-inclusive" experience for their customers. 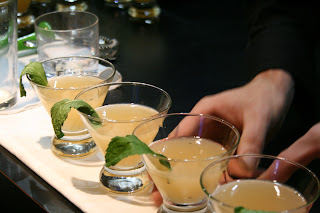 What does that mean? Well, Seabourne is testing a model which would include airfare, a nights' hotel stay and land-transfers both before and after the cruise, and credits towards shore excursions. They're calling the program "Advantage Fares"; it also includes all the extras Seabourne is known for (think lots and lots of booze, both with and between meals; plus no gratuities). Apparently this new program is available only for 11 sailings in 2013 and must be booked by the end of October. If it's a success, Seabourne will undoubtedly expand the program.

Azamara Club Cruises, the premium sibling to Celebrity and Royal Caribbean, has gotten quite creative with its new all-inclusive offerings. It is adding complimentary beer, wine and alcohol for its customers (not top shelf, though), but more intriguingly, free nighttime shore excursions and events. According to industry newsletter Travel Weekly these will include such novelties as an opera performance at a Tuscan palazzo and a sherry tasting and equestrian show in Jerez, Portugal. To be fair, Regent Seven Seas has offered night programs in the past. But the expansion of this concept to a line with more reasonable costs (Azamara is "premium" but not "ultra premium) is an innovation.

Speaking of price, Azamara has announced that its rack rates will go up Nov 1 to pay for these extras, adding that those who book before then for 2013 will still have access to the extras at a lesser price. So should you run out to book? Not necessarily. As we all know, very few folks book cruises well in advance these days because they know sales reward those who wait.

Also in the newly generous pack Crystal Cruises which announced at the start of the year that it would be waiving gratuities and pouring lots of free drinks on board (though it, too, makes an exception for the pricey potables). And Thomson Cruises of the UK has announced it will be giving free drinks on its island cruises. What's notable about that is that Thomson is a budget-priced line, unlike the others giving the freebies. Its new policy begins in March of 2013.

This all begs the question: are these inclusions a big enough incentive to book Crystal, Seabourne, Azamara or Thomson?

Obviously not, if you're a teetotaler.

For the rest of us....it depends on taste. Even with these "freebies", one will pay exponentially more on Crystal for a week at sea than on, say, Carnival or Royal Caribbean. For a certain type of luxury lover, that extra outlay is worth it. For those who simply want to hop ports and bask in the sun, probably not (especially since so many of the affordable ships now have terrific amenities nowadays). Still its an intriguing trend for an industry that had seemed more intent on nickle-and-diming passengers recently.
Posted by Pauline Frommer at 2:22 PM