In Las Vegas casinos, the big spenders are called "Whales".

I'm guessing high rollers at sea have a different nickname.

But they're being as closely tracked, as is clear from yesterday's announcement that Norwegian Cruise Lines will be offering special discounts, through travel agencies, to cruisers who have a known-history of hitting the gaming tables and slots. 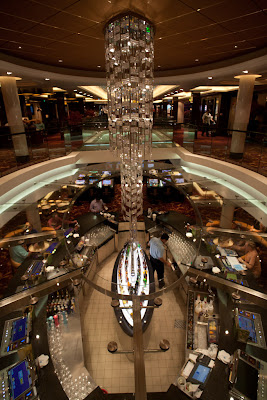 These discounts had been offered exclusively through Norwegian's "Casinos at Sea" program, but apparently only 1% of passengers join that club, necessitating the move to a travel agency-based model.  NCL will be telling agents which clients to reach out to with special, gaming-based discounts.

Carnival Cruise Line also has a player's club, though I've heard reports its rewards are harder to obtain, and likely to be smaller in scale (free beverages as opposed to free suites). That being said, the rewards earned by gambling on a Carnival cruise ship--and they can include cash rebates on future cruises--can be used at any of the ships in Carnival's fold (Holland America, Princess, Cunard, Costa, Windstar and Seabourne).

Interestingly, the website SlotPlayCoupons.com, which focuses primarily on Atlantic City and Las Vegas casinos, has added the slot machines on a number of NCL ships to its roster of "pay $25 for $50 worth of play" coupons.

For information on betting limits, range of games and other information about casinos on the various cruise lines, head to the website www.cruise-casinos.com