In yet another salvo in the ongoing war between air carriers and third party booking engines, Frontier Airlines announced today that it would no longer accept bookings through Expedia. Apparently, contract negotiations broke down, leading Frontier to go its own way.

Will it last? Well, when American Airlines decided it would no longer sell through Orbitz in 2010, that online travel agency retaliated and, due to a judge's order, American fares returned to the Orbitz site in 2011. 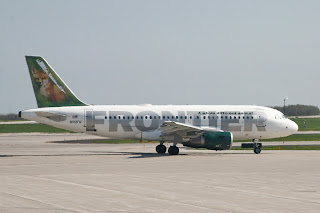 This is all part of a larger strategy, on the part of Frontier, to cut out the middle man (and his fees). In fall of 2012, the airline announced that only passengers who booked directly on the Frontier website would be allowed to choose their seats in advance (the airline also attached ugly, additional fees to change fees and other services, for those who didn't book direct). This latest move can be seen, I think, as the next move on the chess board.

Who's hurt in all this? Expedia, obviously (Frontier fares will still appear on Orbitz, Priceline and Travelocity). But  the consumer is also a loser here, as it will be more difficult for potential flyers to suss out what the costs should be on the routes Frontier flies.
Posted by Pauline Frommer at 5:55 PM