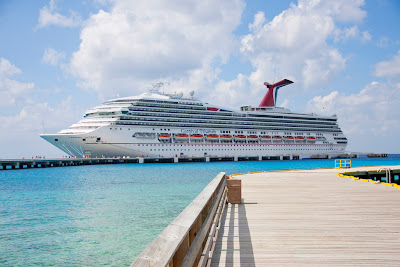 My friend, Carolyn Spencer Brown, cruise expert extraordinaire and Editor in Chief of Cruise Critic, has a theory as to why cruises have exploded in popularity this past decade. She points out that if you look at cruise ads, you rarely see the water. Instead, you're introduced to a resort that has everything you could want on a vacation. There's little, if any, reference to maritime pleasures, the lure of the ocean or anything else to remind would-be vacationers that they'll be afloat.

Pretty easy to see why: anything that floats can potentially sink. Or get jostled around. So the cruise industry has been very savvy about uncoupling the image of cruising from the vicissitudes of life at sea.

This type of marketing works until disaster strikes. Both the Costa Concordia tragedy and this week's Carnival Triumph fiasco (the ship had a fire in the engine room, is hobbled and powerless and is being slowly pulled back to port) make people think twice about cruise vacations, especially those who've never cruised before. How could they not, when USA Today is running the headline: Odor on Disabled Ship 'So Bad People Are Getting Sick'. This disaster comes close on the heels of a fatal accident aboard a Thomson Cruise in which 5 crew members were killed.

This is a long build-up to the answer to the question I posed in the headline and the answer is: undoubtedly.

The cruise lines had been making noise about incrementally raising the base prices of cruises in 2013. But if bookings drop precipitously--and history shows us that they will after a well-publicized incident like the one aboard the Carnival Triumph--I very much doubt we'll see higher prices overall in 2013 than we did in 2012.

So what's should the vacationer who's still interested in cruising do? Monitor the prices and wait a bit.
It will take a few weeks for the sellers to register that a booking drop has occurred and start the discounting process.

In fact, it's always a good idea to wait, unless you have very specific cruise needs (say 10 cabins all on one hallway for a family reunion). Right now is "Wave Season", the time of year that the industry attempts to get consumers to book by throwing a few gimmes their way (free cabin upgrades are common). Truth is: the discounts and gimmes are usually better later on, in the 2 months leading up to the cruise itself. You rarely gain anything (except, perhaps, peace of mind) by booking months and months in advance.

One final thought: I must give some kudos to Carnival. They've done the right thing by offering all the inconvenienced passengers their full money back, plus money they spent on the cruise (for everything but the casino and spa, apparently). Usually they just offer a discount off the next sailing. Carnival is offering that on top of the full refund, which is quite a classy move.

Let's hope the poor passengers and crew aboard the Triumph get home soon, safe and sound.


Posted by Pauline Frommer at 4:09 PM