What Will the US Airways/American Merger Mean to You?

Appropriately enough, American and US Air have until Valentine's Day to decide whether they'll be wed. On April 15, the agreement between the two carrier allowing them to share information, during merger talks, expires.

Sure it can be extended (and who doesn't like more foreplay?), but it seems clear that the two will soon be one. Which would leave the United States with four super-carriers operating 80% of the flights around the United States. 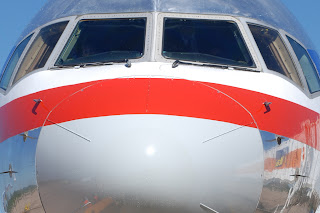 Remember "too big to fail" in the banking world? Meet its skyborn equivalent.

Merger fatigue has set in among the pundits, and most are saying that this latest consolidation will have little to no effect on consumers.

Sure prices haven't skyrocketed since the last merger. But there's been a steady creep upward. And many more changes are on the horizon.

Significant changes, actually. American and Frontier both have introduced "bundling" schemes which tie all sorts of extras (luggage fees, priority boarding, cancellation fee waivers, etc.) to the base cost . Click on my links for details on how those programs will befuddle the consumer and hogtie such flight search engines as Kayak and Momondo. In short, it's going to be very, very difficult in the near future to compare one flight to the next, since each will be customized based on your past flying history. The ultimate result? When the ability to compare flight prices evaporates (and it may soon) and consumers are given even fewer options of airlines, I have no doubt the cost of flying will surge upward in 2013.

And let's not forget about the corrallary airline fees, which just keep morphing and increasing. According to a recent study, 36 airline fees were increased in 2006 and another 16 redefined. While there seems to be less of a direct causation between the mergers and that trend, well, who the heck knows.

Finally, did you hear that Pope Benedict will become the first Pope to resign since 1415? I blame Delta Airlines.
Posted by Pauline Frommer at 8:03 AM